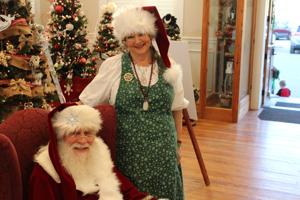 Published in the New Braunfels Herald-Zeitung on December 1, 2017

The holiday spirit was well in gear Wednesday afternoon in the Milltown Historic District, where children were singing, Santa was visiting, and an array of trees were on display during the second day of the third annual Festival of Trees.

“It’s such a wonderful thing to see all the trees and the children singing,” said Cindy Hohmann, whose husband, Tom, as Santa Claus, received Christmas-gift requests from the kids.

Throughout the main house were 36 beautifully decorated full-length and table-top Christmas trees, which were being auctioned off to benefit Comal County Senior Citizen’s Foundation and Central Texas Advocates for Seniors.

Seven of the trees had already been sold in bids ranging from $300 to $400. Sally Nichols, event co-chair, said she expected most of the others would be sold on Thursday and today, when the event concludes at 1 p.m.

“It’s been great so far,” Nicholls added. “We’ve sold a lot of trees and had a lot of community support. But I’d just like to encourage everybody who does not have a tree to buy one for someone else in the spirit of giving — they can give them to their favorite charities.”

Two Raffle Trees offered chances to win $2,400 in gifts and prizes donated by local businesses and individuals. Nicholls said she believes this year’s total will exceed the $10,000 raised last year.

Festival of Trees-New Braunfels is located at The Grand in Milltown, 490 Porter Street, just behind Market Place Shopping Center.

“There’s still time for people to come out and enjoy the trees and entertainment and support their favorite charity,” Nicholls added. “They are all invited to come — if they can’t buy a tree, they can still make donations.”

SHARE WITH FRIENDS
Join us November 19-21 at Milltown Historic District!
Contact Us
Copyright 2020 - All Rights Reserved - Festival of Trees New Braunfels
Back To Top